A rainy Friday evening saw runners set off on the first race of the now legendary Rochdale Three Day Event. Now in it’s 25thyear the tough event is a highlight of many runners’ year. Originally started to celebrate the 100thanniversary of the founding of Rochdale Harriers & Athletics Club, the three races are all based in the pretty village of Norden in Rochdale. Day One takes in six miles of hilly roads. Being described as a ‘fell race on the road’, runners ascend roughly 500ft within the first mile and a half. Day Two is a six mile cross country race and Day Three is the now legendary 6 mile Knowl Hill Fell Race, taking in some of the most impressive vistas in the borough. 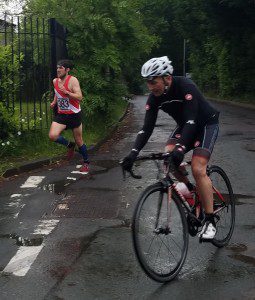 The Friday night road race saw Salford Harrier Joe Bailey finish first in a time of 33:40, with Rochdale Harriers Chris Merchant (MV45) next across the line to finish in an impressive time of 35:15. 3rdpaced male was Prestwich AC’s Paul Savage (MV40) just 9 seconds later. Jordan Hughes of Middleton Harriers was the first of the Three Day Eventers over the line in a time of 36:16, closely followed by MV55 Alan Lundberg-Bury (36:28) and Rob Mills (36:45). 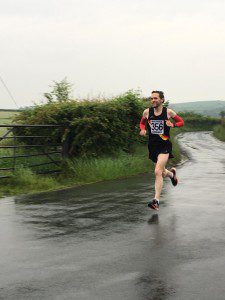 First female was Rossendale Harrier Anne-Marie Hindle in 41:41 (LV45), making an impressive start to her three days. Next female to cross the line was Rochdale’s rising star Fiona Williams in a personal best time of 41:57. Third lady was Janet Grint of Stockport Tri in a time of 43:48. Just two seconds separated third and fourth place, with Rochdale’s Emma Gumbley having a fantastic run to finish in 43:50. Well done also to Colette Cooke who continued her run of good form, finishing in 51:38 to win the LV35 prize.

Sixteen Rochdale Harriers completed day one, with thirteen of the sixteen Harriers racing on the Saturday and Sunday as well as the Friday race. The second race of the series on Saturday morning is arguably the toughest race, with runners having very little rest between Fridays gruelling 6 mile road race and the next morning’s challenging race across six miles of the Norden countryside. 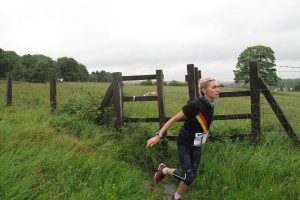 Very wet conditions met the runners at Saturdays cross country race with sixty eight competitors braving the rain to complete the three off-road laps. First to cross the line with an impressive lead was Prestwich AC’s Rob Mills in a time of 40:19. Finishing next in a time of 41:27 was last years Day Two winner, Rossendale’s Alan Lundberg-Bury (MV55). Just 13 seconds later Malcolm Fowler of Wilmslow RC crossed the line. All three were entered in the TDE and Robs’ strong run on day two meant that just 51 seconds separated him and Alan going into the final race on Day Three. 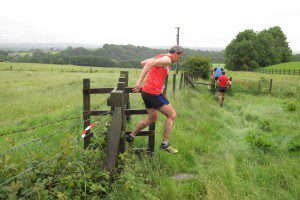 In the ladies race the first two ladies were very closely matched after day one, with just 16 seconds separating Anne-Marie Hindle and Fiona Williams. Fiona ran an impressive 46:44 on the tough six mile cross country course to turn the deficit around and finish first lady in another personal best time. Anne-Marie crossed the line in a time of 47:53 meaning that Fiona had taken the lead overall going into Day Three. Third lady to cross the line was Bury AC’s Katy Geelan (LV45) in 49:43. Next TDE athlete to finish in the ladies race wasFV40 Janet Grint (49:54), maintaining her third place over the first two races. Rochdale’s Colette Cooke once again had a good run to claim the LV35 prize for a second day (58:16), and international athlete Rochdale’s Jan Needham ran forty seconds faster than last year, claiming the LV65 prize in a time of 57:16.

Going into day three it was all to play for. Day three is the highly popular Knowl Hill Fell Race – six scenic miles of Rochdale countryside including a now legendary scramble up the face of Knowl Hill itself. Both Fiona Williams and Anne-Marie Hindle being very strong fell runners and with just a minute between them it was guaranteed to be an exciting Day Three in the ladies race. Standings were equally close in the mens race, with Rob Mills in the lead and Alan Lundberg-Bury less than a minute behind. 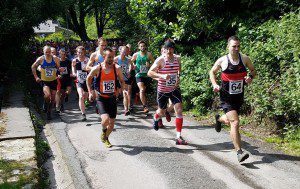 In a change from Saturday’s weather, perfect running conditions saw runners set off from Norden to take on the 1300ft ascent of Day Three – TDE runners having already completed two tough races over the previous two days. Bury AC’s Ben Coop won the race overall (43:26) with an impressive lead of over 4 minutes on the next finisher, Richard Shuttleworth of Prestwich AC (47:40). First TDE athlete and third male in the fell race was Rob Mills of Prestwich AC, running an impressive 48:04 meaning that Rob was the winner of the TDE overall. 4thmale was MV40 Chris Goddard of Todmorden Harriers (49:50). Next over the linein 5thplace was Rossendale’s MV55 Alan Lundberg-Bury who had a strong run to finish in an excellent time of 50:10, finishing in 2ndposition overall in the TDE. 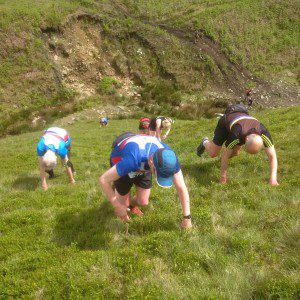 The first lady to cross the line in the fell race was Rossendale’s Emma Robinson (56:18) who last week was also first lady at Edenfield Fell Race. Rochdale’s Fiona Williams ran an amazing 56:26, taking almost 4 minutes off her previous years time and finishing a matter of seconds behind Emma after a closely-fought race. Fiona’s strong performance sealed her position as first lady overall in the TDE, and winner of the Phil Roberts trophy for first Rochdale Harrier lady. 3rdlady over the line was Todmorden Harrier Pauline May in a time of 58:14, with Rossendale’s Anne-Marie Hindle (LV45) finishing a strong 4th(59:26). Anne-Marie’s excellent run was enough to guarantee her 2ndlady overall in the TDE. Worthy of mention is the battle for 5thplace, with Middleton’s LV45 Emma Ball continuing her superb season, managing to hold off Bolton Harriers FJ Rachel Bailey for the 5thplace finish – just 1 second separated the two ladies. Well done to Rochdale’s Jan Needham who was 1stLV65 for the fell race. 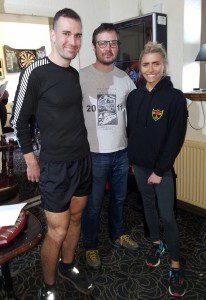 Alex Frost continued his excellent run of form and raced well on all three days. His fine performance ensured that he was first Rochdale Harrier man overall in the cumulative results, sealing his victory as the men’s Phil Roberts trophy winner for the second year running.

Full results for all three days can be found here.

Well done to all competitors, and a big thank you to all the race organisers and marshals for another fantastic event. Here’s to another 25 years!