The postponement of the Trafford 10k due to the ‘Beast from the East’ meant that the Andy O’Sullivan’s Colin & Brenda Robinson 5k at Cowm was the first race in the club’s 2018 Road Race Championship. Fittingly, in honour of two Rochdale Harriers legends, more than a quarter of the field were from the club.

From the start of the race, eight Rochdale Harriers men crowded the top ten places, dominating the race. Richard Stirzaker took the win in 16:24, in front of Halifax Harrier Will Smith in 16:41 and Jon Dearnley-Lane in 16:58. New members and twins Lewis and Philip Hinchcliffe battled for sibling bragging rights, with Lewis beating his brother by 2 seconds in 17:04 for fourth. Sixteen year old Charlie Harding took six place in 17:12, with a somewhat older Chris Merchant in seventh in 17:16, another junior Oliver Bentley demonstrated strong improvement over the winter to finish ninth in 17:26. Current Road Race Champion, Danny Bennett, was tenth in 17:29. 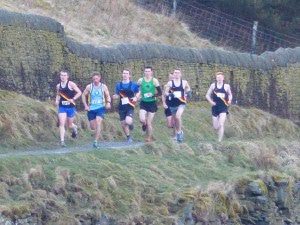 Seventeen year old Jessica Bull was second woman in 19:47, with Stephanie Harrison running a personal best of 20:43 to finish fourth. Ladies Captain, Jill Butterworth, was fifth in 21:20, just three days after completing the Canalathon 75km. A total of 28 Harriers completed the race, a number of whom demonstrated their hard work over the winter by running personal bests. The standing in he Road Race Championship after the first race is set out in the tables below.

The next race in the championship will be the Joe Salt 5k, also at Cowm on Wednesday 4th April. A 1 mile race in aid of the Children’s Heart Association, the ‘Mia Mile’ will take place at 6:45pm before the 5k. It would be great if you could take part in this event, either racing hard or just using it as part of your warm up.

The Trafford 10k will stay in the Road Race Championship, the race has been rearranged for 2nd September.