The Canalathon 2018 took place on Sunday 25th March. This year saw Gareth Hunt taking on the 50km race for a second time, targeting the club 50km record of 4:37:41. Jill Butterworth was competing in her fifth Canalathon, defending her title as women’s champion of the 75km race, looking to improve her own club record of 7:45:28. 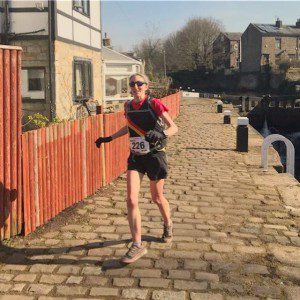 Gareth started strongly, going through the first checkpoint at 17km in 1:23:04 and the 33km check point in 2:44:08. By his own admission, things started to get a lot more difficult in the later parts of the race, with the last 10km being particularly difficult. However, despite having only decided to run the race earlier in the week and not trained specifically for it, he managed to hold things together and finish in 4:24:57, in 8th place out of 140 starters.

The 50km was won by Jarrod Gritt of Royton Road Runners in 3:36:37, with April Caufield of Halifax Harriers winning the women’s title in 4:17:00. 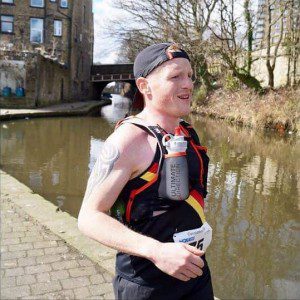 Jill hoped to defend her title and break the women’s course record of 7:29. After an exceptional year, setting personal bests in virtually every race, anything was possible. Jill passed through the half way point in 3:31:05, well inside the old women’s course record in overall 9th place, however the race was being led by Rebecca Johnson of Bellahouston Road Runners, closely followed by Irish international ultra runner Susan McCartney, who passed through half way in 2:59:36 and 3:07:20 respectively.

Despite blisters and battles with brambles, Jill stayed true to form and maintained a good pace as other runners started to suffer and slow, going through marathon distance in 3:56:30 and 50km in 4:46:39. By checkpoint 5 she had moved up to 8th place, 7th place by checkpoint 6 and finally hitting the finish line in 6th place overall and 3rd woman, in a time of 7:16:40. 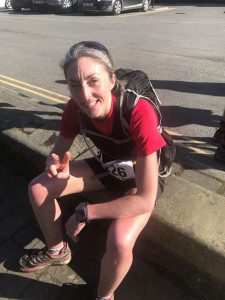